The ILCA 6 World Masters sailed from the Vallarta Yacht Club in Mexico has concluded with an emphatic win for Jeff Loosemore in the GGM Division. Jeff won nine of the 12 races and had three seconds to win by 25 points.

MHASC club mate Rob Lowndes was eighth in the GGM division. Rob’s commented on Jeff’s win “Jeff is the GGM World Champion, his third world masters championship. His sailing today was as always meticulously planned and executed. He got a conservative start in the third row and sailed slow downwind to avoid any hint of a yellow flag to the extent that I was sailing at about the same speed! Having got that over and the overall win in the bag he let fly in the last race winning by at least a minute. Congratulations Jeff”.

WA sailor David Luketina lead for most of the series in the GM Division but was pipped at the post by three points by Canadian Allan Clark.

Hard luck story of the final day was in the Legends Division where Bill Symes USA had 8 wins and a second with two races to go and so only had to finish both races to win. Instead he got a UFD (over start line early) in Race 11 and was disqualified letting “Boomer” Chris Boome win overall by one point. Rob Lowndes recalls that Chris was about the only sailor who started in Lasers 50 years ago and was ecstatic about his win. He was 3rd in the very first worlds in Bermuda in 1974.

The full event results are Here and photos and reports are on the event web site Here. 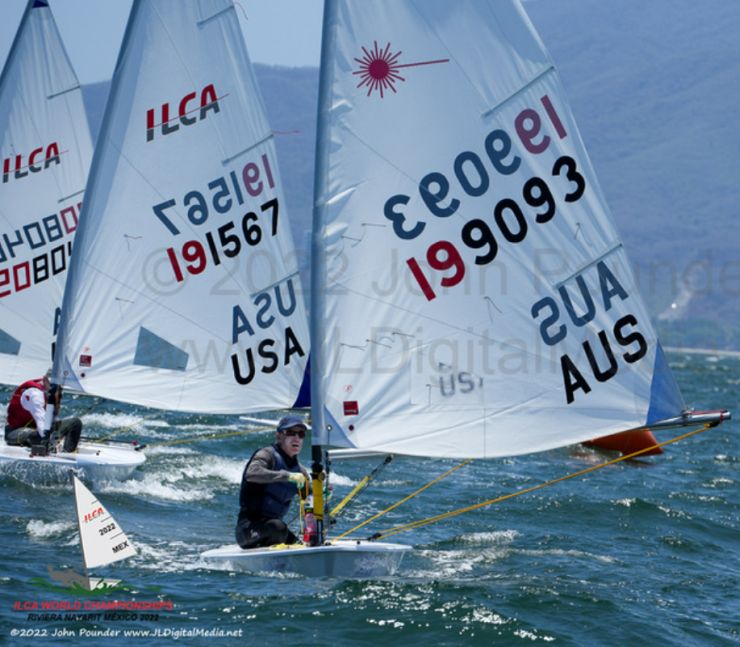