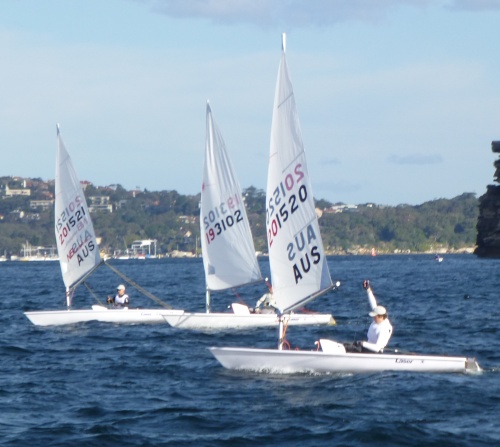 Another fabulous day on the Harbour with the second round of the NB Sailsports Sprint Series sailed from Middle Harbour Amateur Sailing Club on Sunday 4th August. 49 boats competed in the three races held in a pleasant but shifty breeze which kept everyone on their toes.

Winners on the day were Blake Seley in the 4.7′s with a 1,1,2 Shane Conly in the Radials with a 3,2,2 and Ryan Palk in the Standards with three bullets.

Well done the young team of 4.7 sailors from Woollahra who sailed over to Middle Harbour to compete.You can see the results for the day here and the for series to date here.

You can see some photos of the races taken by Geoff Lucas here.

Thanks to Middle Harbour Amateur Sailing Club for the event organisation, the catering and arrangements for parking and rigging.

The next leg of the Sailsorts Sprint Series is at Gosford on Sunday 25th August with the first race start at 1.00pm.