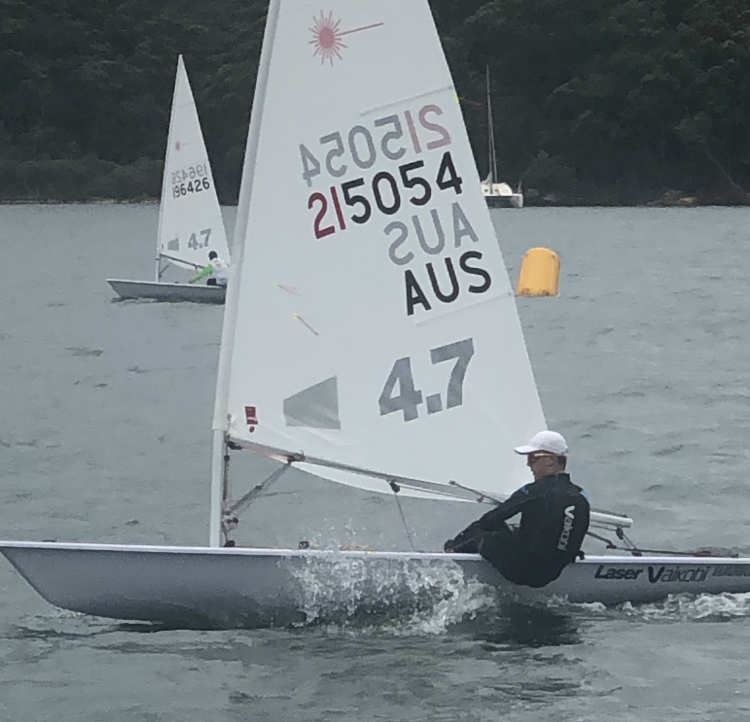 Oliver Gordon on the way to a convincing win in the 4.7′s

While there was near record rainfall at least the wind was also in good supply from the SSE at 12-14 knots on Saturday and SW 12-16 on Sunday. The breezes were shifty with some of the Pittwater terrain adding to the challenge of working out the fastest way to the top mark.

All six races were completed on full length courses so by the end of the regatta (when the sun did shine) the sailors knew they had had a good workout.

In the 4.7′s local Oliver Gordon dominated with 5 bullets and a second as his drop. James Henderson from Lake Macquarie was consistent counting four seconds and a third for a clear second place. RPAYC’s Morgan Wells was third and the first female was Bayley Taylor also from RPAYC.

The racing in the Radials was very close with only three points separating the first four places. Otto Henry RSYS finished on top by a single point from the very consistent Zoe Thompson RFBSC WA. Otto, who was also the first under 19, won three races. Third was Mara Stransky RQYS Qld. Mara won two races and was only 2 points away from Zoe. It was great to see these top women sailors in action including Elyse Ainsworth from WA. The first under 17 Radial was Daniel Costandi RSYS/GRSC/DBSC.

In the Standard rigs the standout was local Chris Dawson RPAYC who had four bullets for a dominant win. Lorenzo Cerretelli WSC had a heat win and was otherwise very consistent to finish second from Ryan McLoughlin MHASC.

Thanks to RPAYC for their fabulous support of the Laser class and for their organisation of the event. Thanks also to Rob McMillan NB Sailsports for sponsoring the event and for coming along to sell gear in the big wet.

You can see some photos from the action at RPAYC HERE. Also Karen Taylor has posted a number of photos on Facebook as linked below;

The full results for the event are linked below; 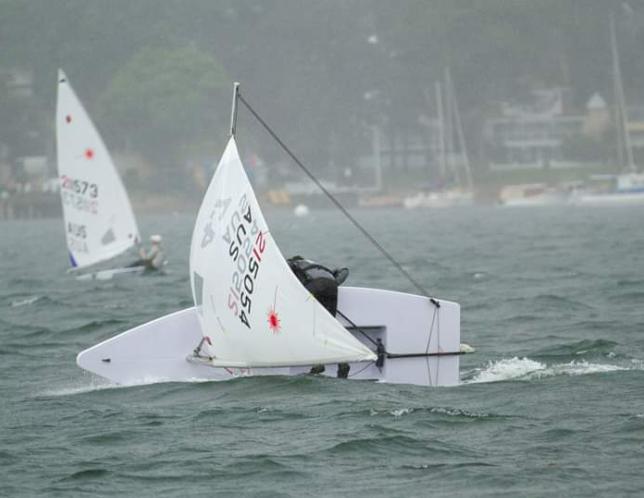 Oliver with a little less control – He still won!