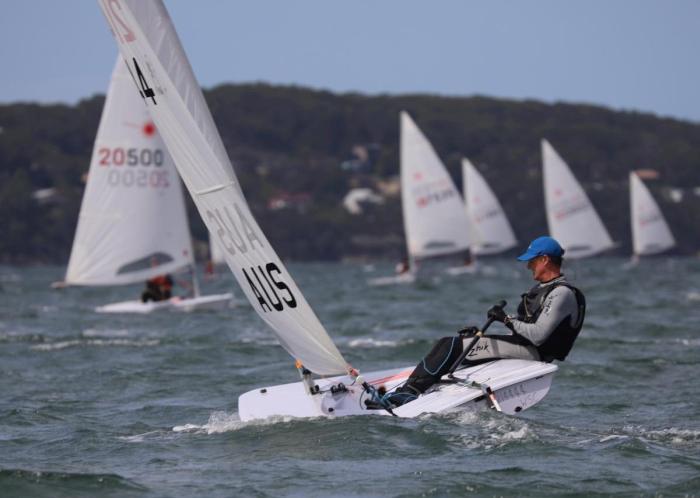 The NSW & ACT Laser State Masters were held over the 2-3 March weekend at South Lake Macquarie ASC and what a cracker event it was.

There were 128 entries sailed in two fleets – Standard with 72 and Radial 56. There was a great representation from Queensland, Victoria and WA joining NSW and ACT sailors for the event.

The weather gods were very kind with beautiful NE breezes on both days from 12 to 16 knots – what’s not to like.

The full schedule of 6 races was completed. The conditions were kind to the race crew and RO Andrew McLachlan however the Standards tested their patience with a near to record 6 black flags in one race. It is true that the black flag finished up in lake but not true that it was thrown there by the race crew in despair at its ineffectiveness. Thanks to the sailor who fished it out and returned it to fly another day.

18 cubes were awarded in the various age divisions.

The outstanding winner in the Standards was current World Masters Champion Brett Beyer WSC who won every race. Though he was pushed at times he was always first when it mattered. David Whait from SoPYC/FSC WA also a Master was second in the standard Fleet by a tie break from Apprentice Master Nick Skulander WSC.

Vanessa Dudley was the first woman and was 4th placed overall in the Radial fleet.

The full results are linked below.

There are very many excellent photos taken by Jane Humphris which you can see at the links below – click the thumbnail to see a larger image.

Thanks to the SLMASC for their fabulous organisation of the event on the water and in feeding and watering us on the land. Thanks also to our RO Andrew McLachlan for his spot on settings and tolerance of the impetuous.